The indomitable Dan Cnossen got some good press recently in the Topeka Capital-Journal. Some excerpts are below, but the whole article is a quick read and worth your time. Check it out.

Standing on his own legs, Lt. Dan Cnossen used to be about 5 feet, 9 inches tall. Now on his two mechanical legs, he is roughly the same height.

Somehow, though, he seems to stand taller....

Cnossen's story is known to Topeka by now. The Shawnee Heights High School graduate lost both his legs Sept. 7, 2009, when an improvised explosive device detonated near him as he led a patrol in Afghanistan. With that incident and subsequent surgeries, Cnossen earned the unwanted distinction as the only double above-the-knee amputated Navy SEAL in history.

"He could have been depressed, he could have whined and complained," Landers said. Instead, he kept his emotions in check and forged ahead. Impatient to the wait for new legs, he took to a hand-cranked bike and rode a half-marathon a mere four months after the explosion. Then he rode from Miami to Key West.

And just last month, he put on his mechanical legs, grabbed his lightweight canes and pounded out six miles in a New York road race, the Achilles Hope & Possibility run....

While living near the Walter Reed Army Medical Center in Maryland, he often drives himself into the hills in Virginia, straps on his mechanical legs that require 30 percent more power to use than regular legs and hikes for hours.

He isn't without setbacks and still has some internal injuries for which he will have to re-enter the dreaded surgery room. Those are just bumps in the road, Landers said. What comes next, who knows. Riding an upright bike is a goal. So is running.

All these things are happening so fast, Landers sometimes has to remind herself — it hasn't even been a year since the explosion. 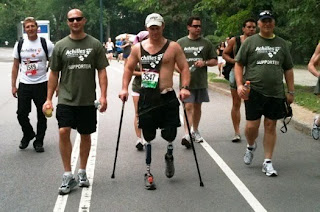 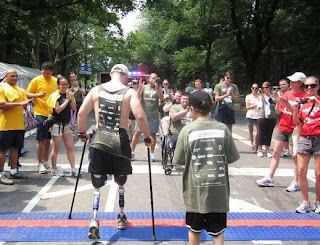 
For more on Dan Cnossen's story, read his blog: http://www.dancnossen.org/

HOOYAH Dan! You are inspiring sir!