One repetition of a "man-maker" is done by starting with dumbbells in hand, going to the floor, doing a pushup, row with your left arm then your right, jump your feet back under you to a dead-lift position, and then do a dumbbell squat-clean to thruster.

There was no rest for the dizzy as Lance and JDP had a nasty little surprise waiting - surprises really - three 400 meter "sprints" with a two minute rest in between. My times were, 1:28, 1:21, and 1:23. It's wild how as I got further away from that horrible workout, my run times improved! Crazy tough this morning!

I feel like I'm getting better at ramping up the intensity though... which I'm told is largely due to dialing in my eating. Most days now it's more of a struggle to keep the intensity up, than to just keep moving. Don't know if that makes sense but, until I improved how I ate it felt like hitting a wall on just about every workout. That's why nutrition is the foundation of the pyramid... 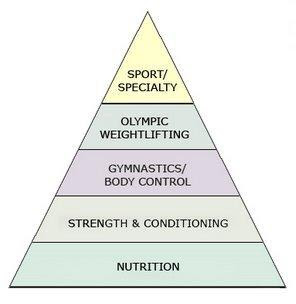 Or maybe CrossFit just acclimates you to running into walls? Metaphorical ones of course... all joking aside... feeling good feeling great! Especially now that it's over... wooohooo!

CrossFit Central's Kris Kepler (on the left) pulling in the rain 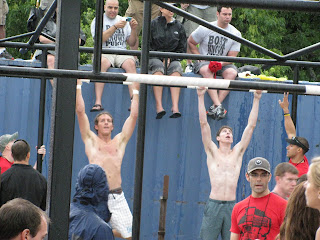 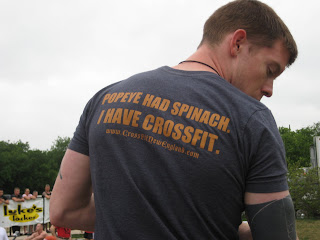