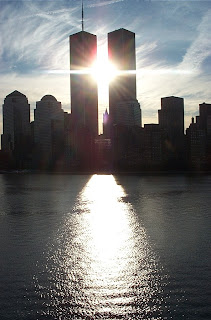 Eight years ago... and so many names... here are three I'd like to tell you about.

Jim Giberson "started slow" in the morning and would take his coffee on the street in front of his firehouse, smiling and greeting people as they walked by (which you know, if you've spent time in Manhattan, is not a common occurrence). After the 11th a young woman would walk by in the mornings, look at the pictures posted outside, and burst into tears. After several days of this, the guys approached and asked her had she known anyone in the firehouse? She pointed and Giberson's picture, but said she didn't know him. She said they exchanged "good mornings" so often that she came to think of him as her personal fireman. He was one of twelve men lost from the Engine 40 Ladder 35 firehouse.

Terence Hatton, known as Terry, was the Captain of Rescue 1, one of the FDNY's specially trained units. He was known as a methodical and tireless worker. His saying was: "It's either outstanding or it's unacceptable." Almost immediately after the 11th, his wife Beth announced she was pregnant. Months later she gave birth to a healthy baby girl - and named her Terri. Captain Hatton led ten men from his firehouse into the World Trade Center. None of the eleven from Rescue 1 survived.

Patrick Brown was the Captain of Ladder 3. Known as Pat or Paddy - at 48 he had become a legend in the FDNY - the most decorated member in the history of the department, always able to be in the right place at the right time to save someone. Still, those who knew him personally described him as exceptionally humble. He was a Marine, Vietnam veteran, a golden-gloves boxer, a marathon runner, a 2nd degree black belt in Seido karate who taught self-defense classes for the blind, a dedicated practitioner of yoga... the list goes on and on. And yet a list doesn't seem sufficient. My friend Sharon Watts put a book together that paints a vivid picture of Paddy's exceptional life. Her book tells "Pat stories" better than I can (but if you ask me in person I'll do my best to recount one or two). Captain Brown led eleven men into the World Trade Center. All twelve were lost.
Posted by Aaron at 5:14 PM