"The road to success is always under construction."
- Anthony Robbins

It's great to be back home, but wow... 3 days in San Diego (where the temperature was never over 75!) and I conveniently forgot what Texas in July is like... anyhow, I learned a lot and had a blast! CrossFit Central's Eric Wood and I flew out to the CrossFit Level 1 certification held at the University of San Diego. There's all kinds of things to go on about, but overall this weekend reminded me how great the CrossFit community is, and in particular, how stellar our coaching staff is at CrossFit Central! I was familiar with all the movements covered, but of course found or learned something new in each lecture and skill training session.

It's true that maybe 90% of the lectures from the cert can be found in the CrossFit Journal, but in my opinion nothing can replace the experience of being coached by such quality instructors (all with different coaching styles and insights). I felt strong in my ability to perform the basic movements going into the weekend, but every time, whether it was during the lecture or in skill practice, I saw or learned something new. For instance, while being coached by Jolie on the deadlift, I had that little light bulb go off in my head you get when it finally clicks, ya know, it just makes sense. Almost without exception every lecture or skill practice had little moments like that. There's always more to learn! I love that about CrossFit.

It wasn't all serious, Pat Barber gave the nutrition lecture which for this venue, I will just say was entertaining and educational. Pat definitely has the ability to be concise and funny at the same time... I was impressed with his coaching ability as well.

Andrew "Drew" Thompson was the guy running the show. He's been around CrossFit since the Glassman's opened the original Santa Cruz gym, and has a wealth of knowledge combined with an obvious passion to coach that is a rare thing. Check out his interview on CrossFit radio, truly a classy dude. Oh yeah - he's a Major in the United States Marine Corps who stood up the first? non-profit CrossFit affiliate: CrossFit Quantico. All things he never mentioned. He just introduced himself as Drew. What a badass.

In addition to all the cool CrossFit stuff I learned, I have to say it was just plain fun to be around such an outstanding group of people. After each day, the coaches were happy to hang around, answer questions, clarify anything, or just BS and goof off! CrossFitters are CrossFitters no matter where you are! Oh and they let us take pictures too.. 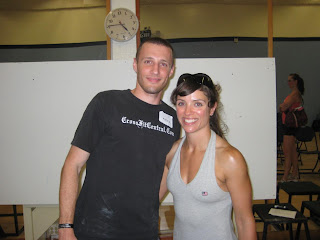 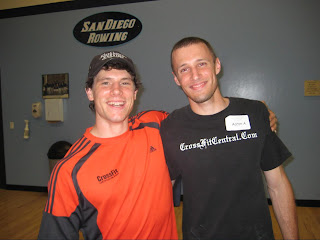